The smartphone comes with a quad HD AMOLED display 5.7 inch diagonal. As you can see in the renderings the display has no bezels and the fingerprint scanner was embedded on the home button. On the rear of the device is a 21.5MP camera with F/1.8 aperture and LED flash, while around the front is an 8MP shooter.
I have also created a new more simplistic looking Samsung TouchWiz UI and audio is supplied by some Bang & Olufsen speakers, while the handset is manufactured using glass and aluminium. 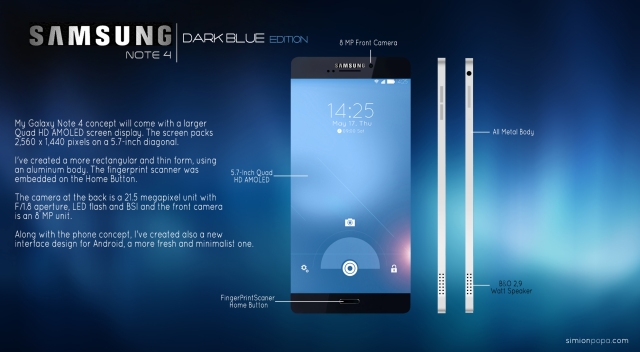 The concept was published on a several popular online phone magazine in the world, including: England, France, Romania, Russia, Korea.

Note* I’ll remind you that this is just a concept and have nothing to do with actual Samsung products that will be unveiled later this year. The Galaxy Note 4 will probably be unveiled around IFA 2014 in September.